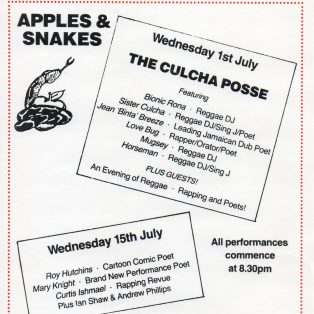 Curtis and Ishmael were a young West Indian/Caribbean comedy duo, who went on to have some television exposure. This was  when Apples and Snakes cabaret format included stand-up comedy and a band. There was a vibrant London Jazz scene which Ian Shaw was part of and well known on the jazz circuit. He went on to record with another regularly featured Jazz singer Carol Grimes during this era.