You are here:
Home>Artists & Shows>Sapphire Reading from her New Novel Push 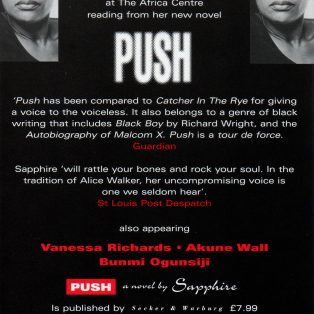 This is another amazing discovery in the Apples and Snakes archives. Many of you will most likely not register the title PUSH, but 12 years later it was made into the award winning film PRECIOUS and the book was renamed accordingly, to tie in with the film. The actress Gabourey Sidibe played the lead role and the film won an Academy Award for Best Supporting Actress, for Mo'Nique who played the mother. This was the same year that Paul Beatty, another Black American writer, also toured with Apples and Snakes, and who later won the Man Booker Prize in 2016. Apples & Snakes was certainly doing something right back then to identify and programme these artistes/writers who later went on to succeed in their fields.